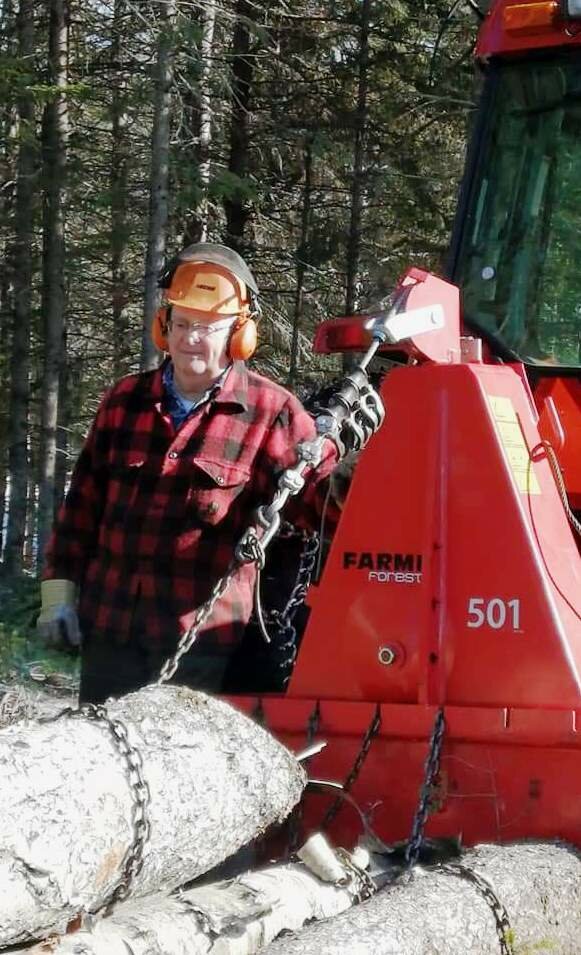 It is with great sadness that the family of Cyril Stanley Vail announce his passing, which occurred on Wednesday, November 10, 2021, at the Sussex Health Centre, Sussex, NB. Born in Saint John, NB, on February 3, 1942, he was a son of the late Cecil and Ruth (Follett) Vail.

Cyril lived his whole life in Belleisle Creek, NB. He carried on the family farm, owned since 1907 after his father passed away in 1980. It became a cow-calf operation which he managed successfully until ill health forced him to sell the cattle. Cyril farmed in conjunction with working the woodlot. He was also involved with SNB Wood CO-OP, NB Soil and Crop, NB Cattle Producers and the NB Federation of Wood lot Owners. The “woods” was his happy place and he loved going there. He continued going to the woods this past winter, operating the log loader while the boys cut. His hobby was work and to him, work was fun.

Cyril loved having his grandkids live close by and loved doing things on the farm with them. He loved spending time at the camp, whether it was their annual trek up the pit road to the woodlot to pick out their “little” Christmas trees, followed by hot chocolate or apple cider, or hunting with them and their dads. The Christmas mornings and brunch together, followed by Christmas Dinner held on Boxing Day was a highlight. A weekly routine was listening to the Sunday Night Jamboree, and often playing Auction 45s with Linda, and mostly winning!! He loved the news and politics and could listen to them 24/7. The TV remote was always in his hand, and he wore out more than one switching channels and hitting the mute button to silence the ads. He provided his family with a good warm home and lots of food and was often heard saying “take all you want but eat all you take”. And NEVER would he have breakfast until the cows were fed!

He loved to learn and remembered it. He got his G.E.D. later in life and took several correspondence courses from the University of Guelph. He had a fantastic memory and was always applying what he had learned. In his earlier years he had a keen interest in photography, loved taking photos and was good at it! A keen observationalist, he was always noticing photos in newspapers and magazines where the negatives were reversed. On the homefront, he would wonder who had been there while they were away, saying, “I see different tracks in the driveway”.

When Tim, Nick, and Brandon went to the woods with him they were always handed a sharp saw and told to “keep it out of the dirt”!

His favorite expressions were:

“Close the door, you’re letting out the heat”

“Linda, what are those kids doing upstairs making all that noise, tell them to come down NOW!”

Arrangements have been entrusted to Sherwood’s Funeral Home and Life Tribute Center (506-839-2156) 18 Scovil Road, Norton, NB and will be held privately.  Donations in memory of Cyril may be made to the Canadian Cancer Society or to the charity of the donor’s choice. Personal condolences to the family and memorial donations may be made through: www.sherwoodsfuneralhome.com

Due to the provincially mandated COVID-19 regulations, proof of identification & vaccinations must be provided before entering the funeral home. Masks must also be worn inside the building.

Share Your Memory of
Cyril
Upload Your Memory View All Memories
Be the first to upload a memory!
Share A Memory