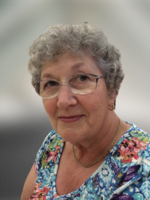 Gramma was born in Midland in 1940, Pop’s mother was the keeper of vital statistics, and issued Gramma's official birth certificate. Gramma and Pop grew up in Midland together living only a few kilometres apart. Gramma headed off to Teacher’s Collage, graduating in 1959. She then began teaching in a one room schoolhouse in Riverglade. After having 3 of her own boys, her love for teaching resulted in her establishing a private kindergarten, which she operated for 17 years until public kindergarten was established.

Gramma's love for Pop brought her back to Midland, where they married in 1965. Their honeymoon began from the farm airstrip where Pop flew her off to Fredericton. She joined Pop at the funeral home, still being involved up until 2021. Her kind, caring personality, and loving hugs comforted so many in their times of need. Gramma's love for children extended well beyond the classroom. They raised 3 boys on the farm, building the dairy barn in 1968 and the house in 1969. The boys all stayed close, and gave Gramma what she loved the most, her 10 grandchildren. Whenever you went to Pop and Grammas there was always fresh strawberry jam, that had twice the amount of sugar then the recipe called for. There was always Oreo’s waiting to be eaten on the way out the door, continuing right up until the day she went to Heaven.

Donations in memory of Ruth, may be made to Sussex Extra Mural Program or to the memorial of the donor’s choice would be appreciated. Condolences to the family and donations may be made through SherwoodsFuneralHome.com