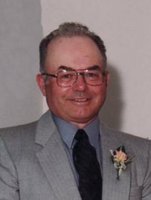 The death of Patrick Dalton Myers, age 82, of Sussex, NB and formerly of Belleisle Creek, NB, occurred unexpectedly on Saturday, December 2, 2017 doing what he loved, having a great chat during one of his many visits to the Canadian Tire Store in Sussex and officially pronounced at the Sussex Health Centre. He was born on December 18, 1934, in Saint John, NB, the husband of Anne (Hooper) Myers and a son of the late Alphonse and Helen (Northrup) Myers. Pat was a loving husband and father and he had many passions in his life. His careers included serving in the RCAF, autobody repairman in Saint John, and a 35 year career at the Irving Oil Refinery. He was a skilled builder of two homes and two cottages. He had great appreciation of nature and the outdoors, and he spent many days after retirement cutting firewood, hunting, or just going for walks with Anne on their land in Belleisle Creek. Pat was a loyal friend, whether he had known you for 80 years or just one. He really loved music and enjoyed playing his guitars and singing, sometimes by himself, other times with his fellow musicians at various jam sessions, especially at the Hampton Senior Resource Center where he was a member. He also served as a member of the Sussex Kiwanis Golden K Group Most of all, Pat was an avid story teller and conversationalist. He loved sharing his life experiences and would bend the ear of anyone who would listen. Pat is survived by his wife Anne of 59 years; sons: Dale Myers of Belleisle Creek, NB, Jeffrey (Cathi) Myers of St. Margaret’s Bay, NS; daughters: Lisa (Bobby) Cooper of Sussex, NB, Paula (Bruce) Golding of Quispamsis, NB; grandchildren Gavin (Pam) Raymond, Dayton Raymond, Anthony (Roma) Myers, Levi Cooper; great-grandchildren Ava, Landon, Chase, Ty; brothers: Raymond (Joan) Myers of Saint John, NB, Ronald Myers of Edmonton, AB; several nieces and nephews. Arrangements have been entrusted to Sherwood’s Funeral Home and Life Tribute Centre (506-839-2156), 18 Scovil Road, Norton, NB, where visitation will be held from 3 to 5 and 6 to 8pm on Wednesday, December 6, 2017. The funeral service will be held on Thursday, December 7, 2017 at 11:00am from St. Simon & St. Jude’s Anglican Church, Belleisle, NB. Donations in memory of Pat may be made to the memorial of the donor’s choice. Personal condolences to the family and donations may be made through SherwoodsFuneralHome.com